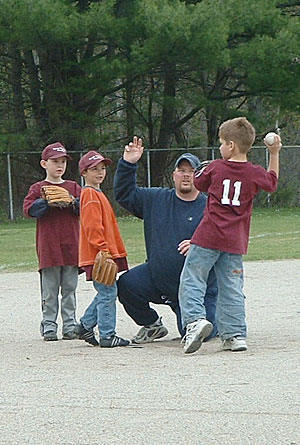 I haven’t been back to Ellsworth in many years, it’s a place that always seems to come into my mind as I get closer to my 40th birthday.  My name is Les Reed, and I graduated in 1987.

After high school, I worked for Competitive Communications, installing phone systems, satellite, alarms, and other communication devices. In 1991, I moved to Florida for about six months where I laid on the beach and tried to forget about everything.
In late spring of 1992 I dragged myself back to Massachusetts, where I got a job at a perishable food warehouse. It was explained to me as working for Shaw’s Supermarkets, but not directly.
In August of 1993, I married Stephanie Greenwood, a beautiful red head from my home town of Haverhill, Ma. In August of 1995, we welcomed our first daughter, Shelby Marie. Thinking she might get bored dealing with us, we gave her a sister, Samantha Ashley in December of 1996, and then just so there would be a referee when the two of them started fighting, we had Hayley Christine in May of 1999.
Now ten years later, we live in Franklin, NH. I am still working at the plant, only it has changed hands several times. From Shaws, to Albertsons, to our present situation, SuperValu. I have been coaching kid’s sports pretty much since 1987. The photo I have attached is from one of my farm teams.
The girls are doing great. They are all tournament golfers, including a few state jr. championships, and player of the year awards. As an 8th grader last fall, Shelby played on the high school boys varsity team. Sam will join her this fall as a 7th grader.
As for me and Stephanie, we have struggled the last few years. The economy has taken it’s toll on us, and we separated at the beginning of this year.
Sometimes these “Where are they now?” topics don’t have fantastic endings. But I try to stay positive everyday and hope for the best.