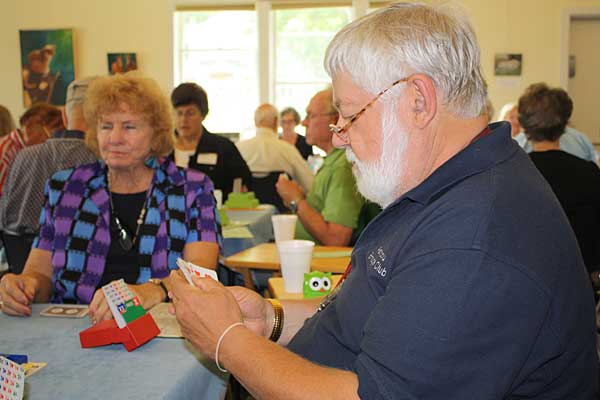 EHSAA president Mike Povich sits in deep concentration during a weekly bridge game at the Northeast Harbor Library, which is held every Tuesday afternoon during the summer. The Asticou/Island Division is a part of the Ellsworth Duplicate Bridge Club, which meets year-round.

MOUNT DESERT — “You know, if I’m playing bridge and a naked woman walks by, I don’t ever see her,” the billionaire Warren Buffet has said of his beloved card game.

The 64 bridge players in the Mellon Room at the Northeast Harbor Library one recent Tuesday shared that same laser-sharp focus — save for game director Michael Povich’s occasional cracks.

“Let’s get this going so we can finish by 5:30 or so,” the former Hancock County District Attorney Povich instructed. He likens directing bridge games to herding cats.

“People get cranky around 5:30 because that’s when it’s ‘Miller Time.’” At 1:30 p.m., a neon green egg timer in the shape of an owl buzzed, and players had 15 minutes to play two hands. Chitchat is discouraged during games, and the room was silent except for players announcing their bids. Christine Strawbridge, a Northeast Harbor summer resident, was Povich’s partner that day. She said she likes to play because it is a good mental exercise.

“It’s a war game, you have to try to psych out your opponent,” Strawbridge explained. “Even more than chess, it’s a war game, it takes strategy, because you work in teams, rather than one-on-one.”

The weekly summer game in Northeast Harbor is just one of many American Contract Bridge League-sanctioned games in Hancock County. In Ellsworth, biweekly games are held year-round at St. Dunstan’s Episcopal Church. Povich said the Ellsworth club has members from Bangor to Winter Harbor. On the Blue Hill peninsula, the Blue Hill/ Deer Isle Bridge Club meets every Wednesday and alternates between the towns. It is the only Hancock County club that uses electronic scorekeepers called Bridgemates.

Povich, who retired in 2011 after 36 years as the Hancock County DA, has been playing bridge since he was about 13. He learned from his mother, Helen, and her “purple-haired” friends in the living room of their Ellsworth home on Water Street. He has run the Ellsworth Duplicate Bridge Club since 1980 and the Asticou/Island Division held in Northeast Harbor since 2008.

In the spring, he gives private bridge lessons. “It’s a really great game,” he said. “If you have a little bit of a brain, you can play.” Easy for him to say.

The complex card game is played among Wall Street financiers and billionaires such as Buffet and Bill Gates. Dwight D. Eisenhower was a lifelong player and held Saturday night games at the White House when he was president. Lore has it that he played the game at every opportunity to relieve stress in the weeks leading up to D-Day (in addition to smoking six packs a day) and that he had an unwritten rule that potential officers under his command know how to play.

Bridge is a game of probability and takes skill, strategy and quick thinking. The game is thought to keep the mind sharp, and some doctors recommend playing to older patients.

“It has been well investigated and established that keeping your mind stimulated with challenging activities will have a significant beneficial effect on maintaining cognitive functioning as we age,” said Dr. David Goodenough, a neurologist at Mount Desert Island Hospital in Bar Harbor. “Playing bridge is an excellent example of this type of challenging activity.”

Bridge attracts an older crowd — the average age is 67 — in part because of the time commitment required. It takes many hours and weeks — or even years — of practice just to learn the game, and a contract bridge game can take four hours or more.

While some bridge players attend a league-sanctioned bridge club, other longtime bridge experts play in smaller groups in their homes.

Ruth Foster, 86, learned the game as a teenager in the late 1940s. “I like [bridge] because it makes you think. It’s a wonderful game to keep the mind going,” she said. Foster gave bridge lessons in the 1950s.

Each Monday afternoon, she plays with a group of eight to 12 women. They play seven rounds, or 28 hands, and there is big money involved: the winner gets $5, and second place wins $3.

“Some of the best bridge players in the area are in our group,” she said. The women rotate hosting games and providing treats such as pecan pie, custard or crabmeat sandwiches. Foster has played with the larger organized clubs in the area, but prefers playing in an intimate setting with women she has known since high school. “We’ve been playing together since our children were young,” Foster said. “We’ve watched each other’s kids grow up, grandkids and great-grandkids.”

One of those women is Harriet Bowden, who took Foster’s bridge lessons in 1955. “I attended and was hooked on the game from the beginning,” she said. “Ruth taught me how to play and we’ve been friends ever since.”

Bowden was also one of the “purple-haired ladies” who taught Povich how to play, and was Helen Povich’s bridge partner for many years. Now, she plays as an alternate in Foster’s Tuesday group, with a group that meets at Kebo Golf Club in Bar Harbor and at the sanctioned bridge game in Ellsworth. She sometimes plays up to four bridge games per week.

On Bowden’s recent 90th birthday, Foster feted her longtime friend with – what else? – a bridge game.

After 60 years of playing bridge, Bowden certainly has many tricks up her sleeve. “I even won on my birthday,” she said.