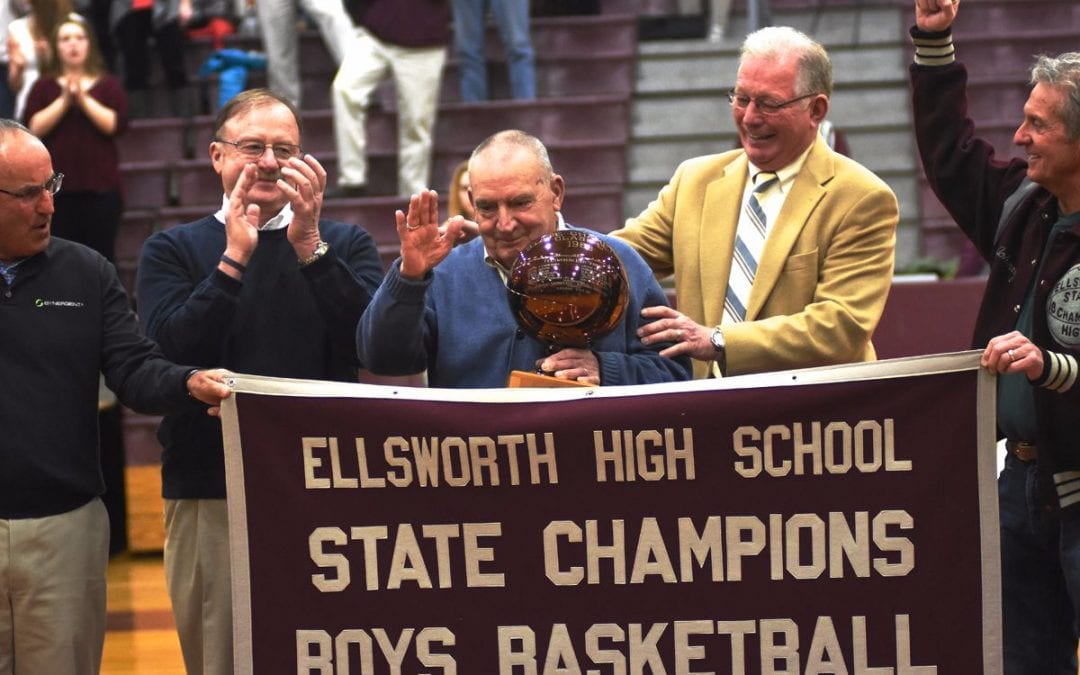 The 84-year-old former Ellsworth High School boys’ basketball coach shifted in his seat when asked about the reasoning behind his 1966 team’s success.

“That’s a loaded question,” Taylor responded, laughing. “They were a special group of young men. They worked hard, and they were dedicated to the game.”

On Friday night, Taylor and that team were recognized inside Katsiaficas Gymnasium before the varsity boys’ basketball game in honor of the 50-year anniversary of their state championship — the latest one in program history.

“It’s wonderful to see them here,” Taylor said of his former team. “This is just a great reunion.”

Taylor and six members of that squad — Donnie Saunders, Jeff Gray, James Markos, Albert Harmon, John Linnehan and Wayne Mayo — gathered inside the EHS cafeteria before the ceremony. Laughter filled the room as they reminisced.

Linnehan, Gray and Mayo — one of the team’s consistent top scorers — stood together. When asked what positions they played, Mayo replied he was a “swingman” who played both guard and forward.

“He spent a lot of time on the bench, too,” Gray added in jest. “Make sure you get that in there.”

In an era that preceded the 3-pointer, Ellsworth beat Cape Elizabeth 72-53 for the 1966 state title. Since then, Ellsworth has made it to the state championship just twice in 1988 and 1992 and lost both.

“We had four players in double figures every game for the entire season,” Mayo said of the 1966 group. “That’s something the team hasn’t had since.”

“You’ve got to give a lot of credit to Coach Taylor,” added Linnehan, clad in his state championship jacket. “I think if you talk to any player here, they’re going to give Stu Taylor the credit.”

In 2010, the Ellsworth Elementary-Middle School gym was dedicated to him as the Stuart C. Taylor Gymnasium.

“He was just a really, really good coach, and not just because of the championship,” Linnehan said. “He really deserves the honor he’s getting right now.”

At center court in the packed gymnasium, fans cheered as Taylor was handed the 1966 state championship trophy and banner. He scanned the bleachers, smiling.

“I always said that winning or losing in basketball was 80 percent the players, 10 percent the coaching and 10 percent luck,” Taylor said. “All I can say is that I was blessed.”

Linnehan disagreed with that equation.

“It’s all coaching,” Linnehan said. “He was a team coach. It was never about individuals.”

“I hope the players who were not starters have good memories,” Taylor said. “They contributed every single day to the success of the team.”