by Anne Berleant of The Ellsworth American 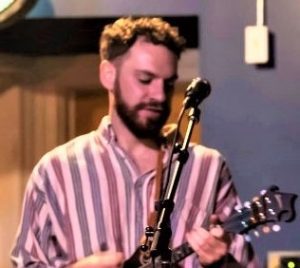 ELLSWORTH — What makes an artist? The question is often asked but rarely answered well because really, who can say for sure?

For musician Blake Pattengale, who just released a four-song EP with his band Two Truths, it all began at Ellsworth Middle School.

“I started playing guitar while at the middle school,” the 2012 Ellsworth High School graduate recalled. “I was really into rock, and [the movie] “School of Rock” and Guitar Hero were big influences on me and why I got into playing guitar.”

But not every seventh-grader who watched and rewatched “School of Rock” graduates from a music conservatory. Pattengale received his degree from the Eastman School of Music jazz program in 2018. At the time, he was performing hip-hop music as Red Beard Samurai.

This was a change from his high-school classic rock cover band Impartial Crowd.“My college career took a turn, he admitted. “That was a very hip-hop-oriented project and super fun to pursue at the time … We had a big nine-piece band with a full horn section and did a ton of shows.”

His latest project, Two Truths, is more jazz influenced but has echoes of Thom Yorke and Nick Drake, both musicians with varied influences.

“People always have this assumption that if you do the rock band in high school, you only like rock. Or if you do a hip-hop project, you’re only a hip-hop head,” Pattengale said. “I guess the point is I still like all those influences and all that music.”

Now he uses just his first and middle names — Jonathan Blake — as he and his bandmates get ready to move to Los Angeles. Two Truths celebrated their EP release “Electric Campfire” on Nov. 18 at the club Abilene in Rochester, N.Y. A reviewer in Rochester’s City newspaper wrote, “It’s impossible to walk away from Two Truths’ first endeavor without a feeling of awe and excitement for what’s to come for this band.”

His fledgling success comes as no surprise to his high school music teacher, Rebecca Wright, now the assistant principal.

“Blake was an excellent music student who was always pushing the envelope so to speak,” Wright said. “What wasn’t provided in our music program, he found out for himself and always challenged himself to reach higher and create new opportunities.”

Pattengale found a guitar mentor in Portland after entering a competition that helped him to “level up” his musical game.

“It definitely was a challenge,” he said. “Talking to other college students, I realized the Ellsworth School system — they don’t support the arts nearly as much as other things. For example, at Eastman was the first time I really heard stringed instruments, violins, violas and cellos. They don’t exist at Ellsworth [like other schools]. I was like, that’s a thing? It was shocking to me.”
At EHS, Pattengale says he “did every single art thing that you can: pep band, choir, jazz choir, symphonic band.”

“He was a wonderful performer, singer and actor with a truly unique approach and perspective,” she said. “He gave many memorable performances in our state. I am not surprised at all with the path his career and life have taken, and we are very proud to call him one of ours.”