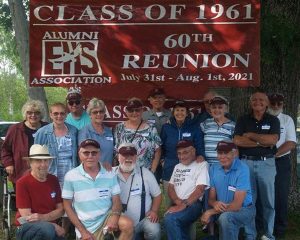 The Ellsworth High School Class of 1961 held its 60th reunion on July 31st and August 1st, 2021 in conjunction with the Class of 1960 who did not hold a reunion in 2020 because of Covid.  On July 31st 34 classmates, member of the class of 1960 and guests took a ride on the Down East Scenic Railroad where a picnic of pizza and sub sandwiches was consumed.  On Sunday, August 1st, 47 class mates, members of the class of 1960 and guests enjoyed barbecue catered by Big Cats at Jenkins Beach. A remembrance of deceased classmates was held.